Welcome to the Council of /tg/ WikiaEdit

This wiki is a reference for the Council of /tg/ role-playing game, and contains information on the background, nations, rules and influential members.

These are still being worked on and fleshed out, since the game hasn't quite started yet.Edit

Player: A player is a person on 4chan participating in the Council of /tg/ game.

Governor(?): A character in the Council of /tg/ game. Governors control one territory and have one vote in sessions. A Governor must be a member of a nation.

Nation: A group of three or more governors that have united under a single name, ideology and geographical area. Nations must have three members before being able to vote in sessions or take territory.

Nomad: A player character that is not part of a nation and does not control territory. They cannot hold land, nor can they vote on bills. They may still propose bills and vote on Issues and in Elections.

Session: A session is a period of time in which issues and bills can be voted on. A session lasts four hours, during which four issues/bills are voted on. (One hour per vote). Sessions are started and run by the Heralds.

Herald: A Herald is a democratically elected position. It is the responsibility of Heralds to create threads and preside over voting Sessions. Heralds are elected weekly. There are (two or three?) Heralds at any one time.

God: The God is a democratically elected position and is the storyteller and game-master of the Council of /tg/ game. The Storyteller comes up with Issues to be voted on and also acts as a Herald if need-be.

Issue: An Issue is an event that affects the Council of /tg/ on a large scale and can be either a good or bad thing. The Council's reaction to Issues are voted on in Sessions.

Roll Call: Performed every Sunday instead of that Session, Roll Call completely empties the Council to clear out inactive members. People who show up for roll-call are granted seats on the Council/Territories on the map.

>A nation that is formed/made official during the week is considered a nation for the purposes of bills and voting. However, they may not claim territories or build until the next roll call.

>A player whom misses a roll call loses any structures they built after the first week of inactivity, representing chaos and riots from their negligent lack of leadership.

>A player who misses TWO consecutive roll calls loses his or her territory entirely as the area revolts, becoming a Nomad.

>A player who misses THREE roll calls in a row is presumed dead and is removed from the Council entirely. They may re-join later, but must start from scratch. 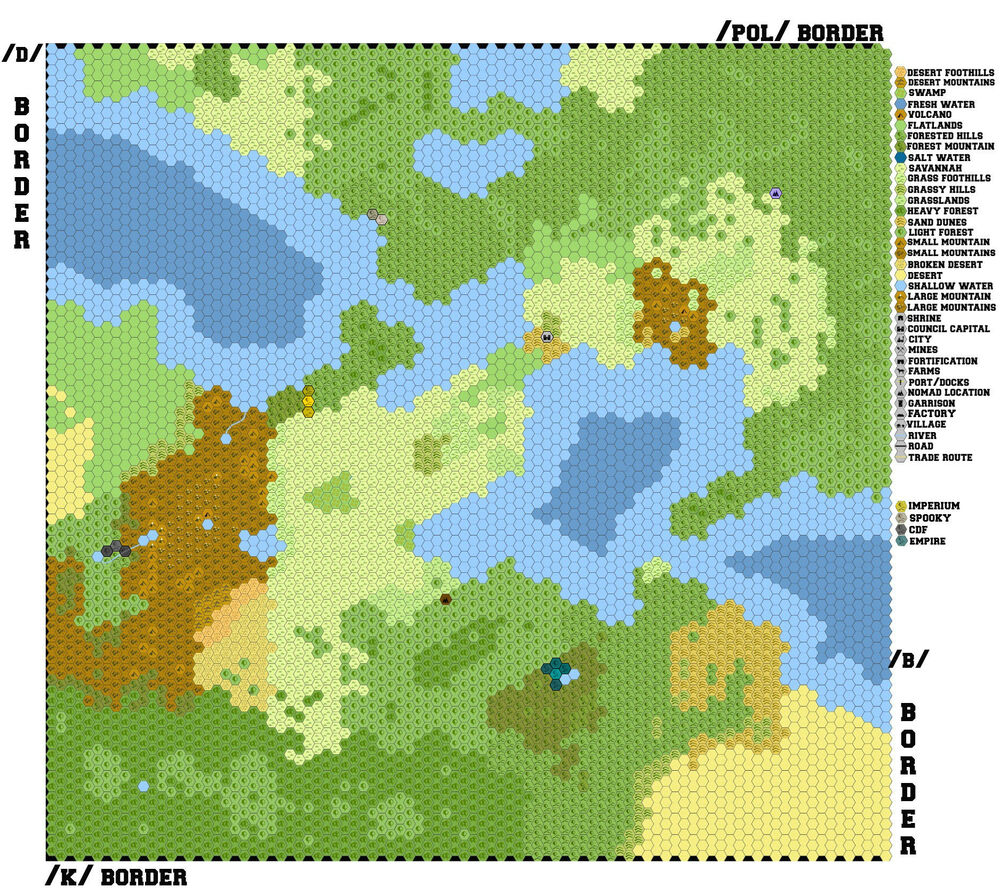 Each nation can hold one hex, where upon GOODS can be harvested from STRUCTURES to make more advanced STRUCTURES.

Current Council as of ??? Edit

Heralds of the Council: Edit

>To join in, simply write your name and choose a party as well as a secure tripcode: https://www.4chan.org/faq#sectrip

Old Wikia (use for reference):

>Figure rules and shit out.

>Roll Call: if you're a current member of the Council report in or you'll lose your seat.

Bills that have not been seconded but are up for discussion and revision.

========================
Whereas regions owned by nations have the capability to generate BASIC, INTERMEDIATE, and ADVANCED goods, we need means of standardizing and utilizing these resources. The following simple ground rules are established to facilitate ease of use in order to lay a framework for infrastructural and regional economic growth.
1. All resources shall be gathered once weekly, at the end of roll call.
2. Only regions both capable of producing goods AND that have the leader for that region present at that week's roll call will produce goods, as they will otherwise be lost to neglect.
3. The standard base unit for goods should be in units of 100, i.e. one territory in a forest region may produce 100 wood for that week.
4. It is resolved that goods totals shall be kept registered on the wiki.
Affiliated Teegeezbank would additionally like to not that the eventual establishment of a commission or duty post to keep totals accurate on the register would benefit Tee Gee greatly, but holds that this post should be established by a separate act. Your support for the 'WE COUNT GOODS' ACT will be the first step in allowing your nations to thrive and flourish.

Any organization that formerly had full nation status, but only receives two pledges of membership during roll call, shall retain it's nation status for one additional week. However, a mandatory donation of <reasonable amount of common resource> shall be required by the end of Mondays session to preserve nation status for the week.

The bill is designed to prevent a potential occurrence where an uncontrollable real life issue could have otherwise prevented a nation from fulfilling the membership requirement. To prevent it from being abused (ie skipping roll call day because you can) there is a small price to pay. It also does not guarantee any former nation a nation level status, as one member is not a nation, nor is a group of two. It is designed to specifically prevent specific cases where out of context issues could interrupt in context gameplay.

The "reasonable amount of common resource" shall be determined by the <AA> once we get our asses working.

Magical items can be very useful, and sometimes vital. However, the overwhelming majority of items that have magical properties have the potential to be incredibly dangerous. This Bill would have all magical items/devices registered with the Council, and any deemed to be too dangerous to continue to exist be destroyed. This Bill applies to any items that were owned before the implementation of this Bill as well. This Bill only applies to magical items.

For a magical item to be considered too dangerous, it must meet these criteria: Able to cause massive unnecessary damage to a person or property. Able to cause curses any way, such as bad luck, illness, or loss of love. Able to transform a person. Able to rob a person of their free-will.

If a magical item meets any of these criteria, a vote must be made to ban the item in question.

Retrieved from "https://council-of-tg.fandom.com/wiki/Council_of_/tg/_Wikia?oldid=614"
Community content is available under CC-BY-SA unless otherwise noted.